Kindle and paperback: Amazon.com, Amazon.co.uk, Amazon.com.au
Visit our shop for other options.
The anthology is also listed on Goodreads 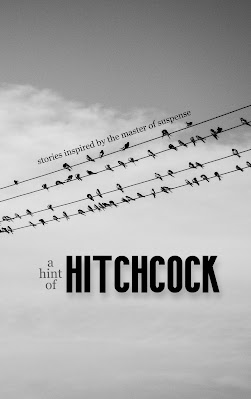 One name springs to mind when we think of classic suspense films; Alfred Hitchcock. His silhouette is instantly recognisable as no one else has quite the same pouty lips and round, chubby face. The way he posed for photographs and his penchant for making cameo appearances in his films bear witness to his larger-than-life personality, but it was his ability to tell a spellbinding tale coupled with his technical brilliance that earned him the epithet of "Master of Suspense". His groundbreaking use of camera movement and the way he framed shots to maximise anxiety and fear place films like "Vertigo" among the very finest examples of creative achievement ever produced within the seventh art. In "Rear Window", he builds edge-of-your-seat tension by placing us in James Stewart's wheelchair and making us watch events unroll through his eyes, and the use of cutting-edge special effects in "The Birds" is almost as impressive as the fact that more than three thousand birds were trained for the film. What else do these three films mentioned have in common, along with "Psycho" and "Rebecca" and so many others? That's right...they were based on novels or short stories; the written word. In "A Hint of Hitchcock", we turn our attention back from the screen to the page, and bring you, the avid suspense reader, modern tales that chill and surprise, all inspired by the work of the master of suspense.
Better Not Look Down - Josh Pachter
Golden Curls - Rebecca A. Demarest
More Than Suspicion - Joseph S. Walker
Paranoia - Paulene Turner
The Suitcase - Jason Fischer
Rebecca Redux - Elizabeth Elwood
Highwayman's Hitch - Cameron Trost
Relish - David Carroll
Karma is a Thief in the Night - Roger Johns
Scallion's Head - H.K. Stubbs
Closed Circuit - Mark Blackham
Vault - Andy Rausch
"A HINT OF HITCHCOCK is a must for Hitchcock fans. Twelve different writers have produced stories inspired by some of Hitchcock’s works, and the action and suspense are non-stop. As with any diverse collection, different writers have different takes and different approaches. The collection opens with Better Not Look Down by Josh Pachter. (Guess which movie that was drawn from). I loved it, even though I’m not good with heights. Another favorite was More Than Suspicion by Joseph S. Walker about a woman who operates a movie theater, that just happens to be showing Hitchcock’s Suspicion, who helps a friend fleeing an abusive husband. Vault by Andy Rausch opens with pure Hitchcockian suspense as robbers take their positions in a bank lobby. Things do not go well. But, beyond a shadow of a doubt, my favorite was Closed Circuit by Mark Blackham, a modern update of a Hitchcock classic, set in a retirement village. The tension was there from start to finish. It alone was worth the price of admission. I’m a big Hitchcock fan and eagerly awaited this anthology. I was not disappointed.
- Robert Petyo, reviewer and author (five-star review on Amazon)
"If you are a fan of stories that keep you on the edge of your seat, then you definitely will not be disappointed with this anthology! As I was reading, The Suitcase, I could not wait to turn the page to see what was going to happen next! This is a fantastic collection of suspenseful stories.
- Nicholas R. Ptak (five-star review on Amazon)
"Editor Cameron Trost has curated an entertaining anthology that pays loving homage to Hitchcock's films. There are Hitchcockian staples such as MacGuffins, charming villains, murders, red herrings, and character-based suspense. While each story involves thrilling elements, the varying subgenres make this anthology a mixed bag of lollies, so you never know what to expect. Great fun!"
- Deborah Sheldon, reviewer and author (five-star review on Goodreads)