Murder and Machinery: An Interview with Cameron Trost 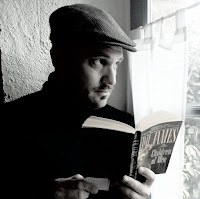 Cameron Trost's "Tenterhooks" is just one of the mad mechanical tales featured in Murder and Machinery. Out April the 3rd. Kindle pre-orders available now.

1. Not many people know this, but my closest friends call me nine-and-a-half. Before you get the wrong idea, it's to do with my toes. When I was about two years old, I had an accident with the drawer I was standing in to get a closer look at the TV perched on top of the chest of drawers. Subconscious inspiration for this anthology? Perhaps.

2. I don't like mangoes but I'm a Queenslander...go figure.

3. I live in Brittany and the history, landscape, and architecture of this beautiful country is increasingly influencing my writing.

It's hard to say exactly what gave me the idea for this anthology. I wanted a title starting with "Murder and..." and the temptation to use alliteration probably took me a step closer. I'm also a fan of the British series, Midsomer Murders, in which farming equipment and various other tools and machines are used as the murder weapon...so, I guess it just fell into place.

Plenty. The Lord of the Dynamos and The Cone by HG Wells and The Adventure of the Engineer's Thumb and The Lift by Sir Arthur Conan Doyle are amongst my favourite classics about machines. Ambrose Bierce's Moxon's Monster is particularly chilling too.

I'm in the middle of the second draft of my post-apocalyptic novel about a pyromaniac. The red ink is flowing. At about 99,000 words, it's the longest story I've written. I'm really enjoying the process. This story is both intimate (first person) and epic at once.

Everywhere! I'm even on TikTok...It's another planet over there! Links to all my social media pages can be found on my website: https://camerontrost.com