Murder and Machinery: An Interview with Duncan Richardson 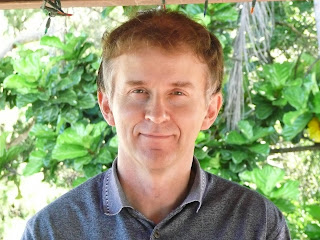 Duncan Richardson's "The Secret Zeppelin" is just one of the mad mechanical tales featured in Murder and Machinery. Out April the 3rd. Kindle pre-orders available now.

*While walking on a bush track beside the Zambesi, I realised the warning signs about crocodiles weren’t just for decoration but wondered why there wasn’t one at the start of the track.

*COVID has shown how most disaster/war stories get the dialogue wrong, which is something I suspected.

*I also suspect that all these points are of no interest to anyone else, but who can predict what will interest strangers? (Editor's note: Our readers are a discerning bunch, Duncan. I wager they're interested!)

I’d just read a book about the German airship bombing campaign against Britain during World War I. In the paranoia about how the enemy pilots were able to find their targets, some people were claiming that the Germans or their collaborators had secret Zeppelin bases inside hills in the British countryside and the airships were launched from there. So I recruited a retired detective to investigate.

Either a crusher in a wrecker’s yard or a mobile phone, it’s hard to say.

Roald Dahl, Edgar Allan Poe and Ambrose Bierce, because their stories are usually based on character rather than just plot. (Editor's note: 100% agree. Roald Dahl really knew how to weave humour and suspense.)

There’s a Dahl story I think, about a machine that has kept a man alive but only his head so he’s powerless to act. (Editor's note: Yes, "William and Mary - HIGHLY recommended!) And Hal, in 2001 – A Space Odyssey.

A draft with lots of bits missing, like a line drawing, and sometimes things are in the wrong place. Then they get filled in and re-arranged, sometimes with the help of my writers’ group.

Never meticulous planning but sometimes a broad outline, usually missing an end, then in the writing, I work out the details but only after several drafts.

A children’s time travel story, set partly in the ear of Australian megafauna.

New comments are not allowed.