An Interview with Joseph S. Walker 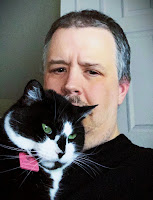 Our next edge-of-your-seat anthology, A Hint of Hitchcock, will be released in time for Halloween, and is available for Kindle pre-order today for just $1.99 instead of $3.99. While the suspense is building, we're interviewing the contributing authors so you know a little more about what makes them tick...
Hi Joseph, thanks for agreeing to be interviewed. Let's get started!
The first question is inevitable...which Hitchcock film is your personal favourite, and why?
I have to go with Rear Window. I love the way the film creates a rising tide of suspense without ever leaving this one, very confined setting. It’s a small world, but a beautifully detailed one. And of course, the performances are all great and the story holds up—it sucks me back in every time.
Which actor or actress do you think was the best he worked with?
Jimmy Stewart. In every one of his Hitchcock performances he’s a character with levels that we don’t perceive at first, depths that emerge as the story develops. He does an amazing job of slowly revealing everything that’s there.
What is it about Hitchcock's films that makes them so timeless, or is it just the opposite, that the appeal lies in that bygone era?
The surface details age, of course, some more so than others. But the essential stories and emotions retain their power, and there are a lot of factors contributing to that, starting with the fact that Hitchcock was an exceptionally talented filmmaker with an understanding of how to exploit the medium’s potential. I think the most important thing, though, is that we can still identify with the way his world is saturated with dread. All of his films have moments where the everyday suddenly becomes terrifying.
Do you have a favourite director, other than Hitchie himself, of course?
The Coen Brothers—who, obviously, know their Hitchcock!
Without giving too much away, how did you come up with the idea for your story in A Hint of Hitchcock?
When I head about the anthology, it was shortly after my wife and I had watched Suspicion as part of our pandemic movie binging. It was the first time I’d seen it, and I was immediately struck by two things—the way the ending feels so forced and artificial, and the presence in one scene of Phil and Izzy, two women coded as a lesbian couple in a way that was very unusual for the period. Doing a little reading about the film, I learned that it was released just a few weeks before the attack at Pearl Harbor. I started to get an image in my head—two characters, in a world newly at war, talking about these strange elements in the movie they just watched. The story grew from my investigation of who these two characters were, and what brought them to that conversation.
Time to get more personal. Tell us three interesting facts about yourself.

I met my wife in high school, and we’re together thirty-four years later; Harlan Ellison is the writer who made me want to be a writer; I have been to Major League Baseball games in twenty-one different stadiums.
What do you aim to give your readers?
If I’m doing my job right, an emotionally engaging experience that makes you want to read straight through to the end. If I’m really doing it right, something that will still be remembered in a week, a month, or a year.

What are you working on now?
I’ve always got a couple of stories bubbling along at some stage in the process. I recently finished a novella about car thieves and blackmail that should see publication next year. Among my recent publications, Hitchcock fans might also be interested in Black is the Night: Stories Inspired by Cornell Woolrich, edited by Maxim Jakubowski. Woolrich, of course, was the originator of the story that became Rear Window. My story in the volume is A Shade Darker Than Gray.
Where can we find you online?
On Twitter, @JSWalkerAuthor, though I take frequent breaks from Twitter for the sake of my mental health. I keep an updated list of my publications at https://jsw47408.wixsite.com/website
Posted by Cameron Trost at 12:55